All individual pieces from 1991 and 1993 originate from the official SWISSMINT coin set editions, i.e. from the coin sets in bu or prf.

Please note: In 1985 counterfeiting the 5 franc coins was made easier because of the switch from raised to deep edge lettering. Because counterfeits of the issue of 1991 were in circulation before the official coin, this issue was withheld and only released in coin sets. Of the 544'000 originally minted coins 36,000 are available in coin sets. The rest were destroyed. Likewise, of the original 5.023 million coins minted in 1993 only 22'700 pieces in coin sets are available. Occasionally such coin sets were taken apart, which explains the existence of individual pieces. 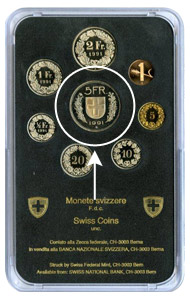 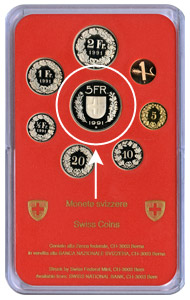 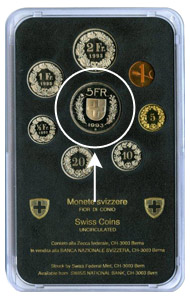